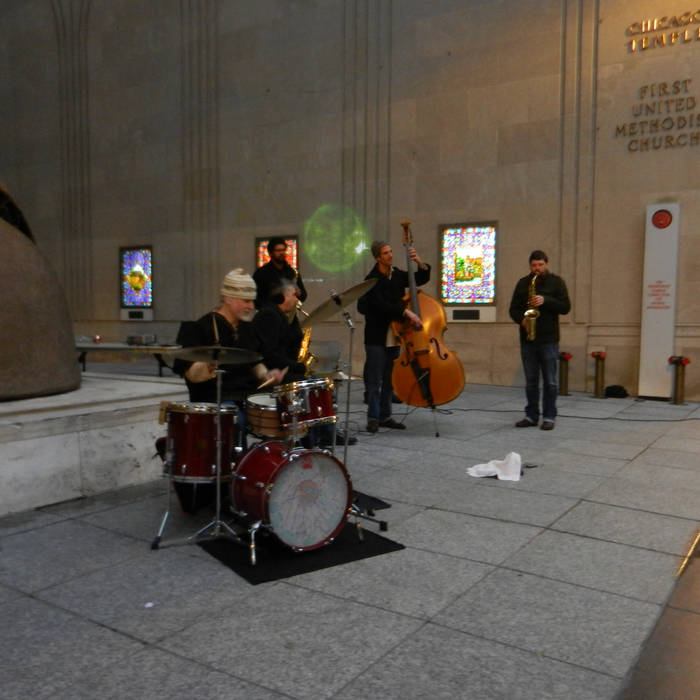 This performance happened in collaboration with the Chicago Temple, which gave us permission to perform in front of "Miró's Chicago." During one segment of the performance several Sound Ensemble members were performing in front of the Miró sculpture, whereas several others were performing on the Picasso sculpture (which has a slanted piece of steel that the public is encouraged to climb on). The improvised sounds of the ensemble members intermingled with the urban sunset and crepuscular din, such as the effects that the skyscrapers and other downtown objects and surfaces.

During this performance we were interested in exploring interrelationships between how performers improvise with each other, while doing so in a site-specific way when we were inspired by looking at the public art and projections of NASA photos. We also wanted to know what would happen when sounds coming from musical instruments are affected by how when the physical locations of the musical instruments changed (from alcove, to open plaza, to saxophone horn faced down urban avenues). We were also interested in “messing with” the sonic, visual and movement categories and boundaries that often become codified and ritualized in urban spaces. For instance, since part of the performance happened on both the south and north sides of Washington St., this was an opportunity to question ways by which streets and the vehicles that use those streets often cut off and divide potential civic and creative activities that could happen in urban areas.

"Sunset with Miro's Chicago" happened during the Ninth Annual Chicago Calling Arts Festival. Chicago Calling is a multi-arts collaboration festival; during Chicago Calling 2014 people in Chicago work with people outside of Chicago -- both here in the U.S. and abroad. These collaborations include a range of art forms, such as music, dance, film, literature, and intermedia -- and they are prepared or improvised. Some Chicago Calling events involve live feeds between Chicago and other locations.

The Chicago Calling Arts Festival is part of the 19th Annual Chicago Artists Month, which highlights the work of hundreds of artists throughout Chicago with performances, exhibitions, open studios, tours and neighborhood art walks. September 27 – October 31, 2014, Chicago Artists Month (CAM) will invite residents and visitors to meet artists and see their work at venues across Chicago. The 2014 theme, “Crossing Borders,” showcases 20 featured programs and artists in neighborhoods ranging from Avondale to Andersonville, Lakeview to Little Village, West Town to Wicker Park and Lawndale to the Loop.

CAM is presented by the Chicago Department of Cultural Affairs and Special Events in collaboration with the Chicago Park District and numerous community partners.

Bandcamp Daily  your guide to the world of Bandcamp